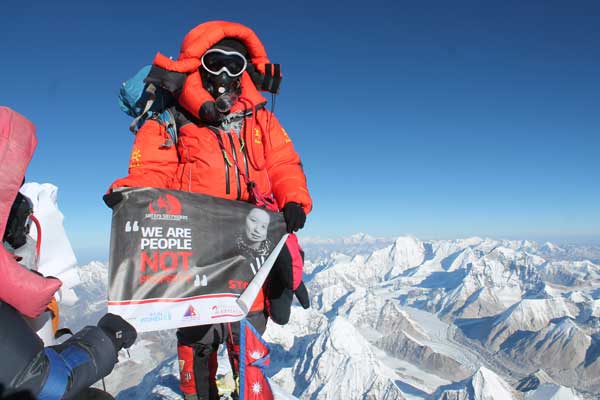 Everest Expedition for a Social Cause (Against Human Trafficking)

In association with UN Women Nepal and Nepal Mountaineering Association (NMA), we organized and sponsored an Everest Expedition starting from 20th April 2017 to 29th May 2017. This expedition was organized to convey message to the world against Gender Inequality and Human Trafficking. Ms. Kanchhi Maya Tamang successfully summited Mount Everest on 20th May 2017 and raised her voice against Human Trafficking.

Trekking Experts has its own identity in Nepalese industry as ethical travel guide and key promoter and initiator of sustainable in tourism promotion. We always conduct all tour business activities consideration eco-friendly and sustainable by respecting environment, local culture and people. We picked the most essential causes of the community that most affect people’s daily lives such as health, education, employment and empowerment, environment protection, community development and cultural conservation. We especially reach out to people by involving in their daily lives; responding their common problems, helping them for their daily problems which has long term impact and sustainable development.

Employment and Empowerment project is the major activities of Trekking Experts’ Corporate Social Responsibility. For continuous income of uneducated people of remote villages, Trekking Experts has provided vocation training for 40 women and 31 men. They have been trained for bamboo products, wood carving training, sewing and knitting etc. And Trekking Experts is supporting them by delivering raw materials on loan and helping them to sell their products. And the beneficiaries were earthquake victims and from poor family background. Trekking Experts has initiated and successfully executed following programs for employment and empowerment.  With the financial help of Caritas Germany, Trekking Experts conducted training session to three temporary camps of earthquake victims in Kathmandu, Nuwakot and Rasuwa. This training session provided training to 71 housewives and 30 men for knitting, weaving and wood carving along with bamboo products.

Trekking Experts has launched Women’s Way Project to empower women of rural part of Nepal and providing jobs to them throughout of trekking and mountaineering. Goodwill Ambassador for UN Women Nepal Ms. Kanchhi Maya Tamang will be leading this project. Trekking Experts will contribute 50% profit gained from this charity trips to Women Welfare Fund. Trekking Experts has designed this trip to provide jobs and encourage female in tourism business. In this trip, the whole team will be consisting of female members such as leader, guide, cook, helpers and porters who all will be female.