Island Peak (6189m) is one of the most popular trekking peaks in Nepal. Situated in the heart of Khumbu, Island Peak can be climbed by anyone; it does not require any special mountaineering skills. Island Peak is just few days away from the most popular trekking route to Everest Base Camp. Locally Island Peak is known as ImjaTse.  It can be clearly seen from Dingboche and Chhukung. Island Peak is located at the middle of the Chhukung valley like an Island in a sea of ice surrounded by Lhotse and Lhotse Shar Glaciers. You can see the spectacular scenery of the world’s highest mountains in the Khumbu region from the Island Peak like Nuptse(7879m), Mt Lhotse (8501m), Lhotse Middle Peak (8410m)and Lhotse Shar (8383m) to its north and Makalu (8475m), Cho Polu(6734m), Baruntse(7720m) and majestic Ama Dablam(6856m) in the east. Trekking Experts offers Island Peak Climbing Trip to let you climb Island Peak.

Island Peak Climbing Trip with Trekking Experts begins with scenic flight to Tenzing Hillary, Lukla airport. Before climbing Island Peak, the trip brings you in Sagarmatha National Park and offers you to trekking in beautiful Everest region. The trail follows the gateway to Khumbu-Lukla, beautiful Namche Bazzar, oldest Sherpa village-Khumjung, Tengboche monastery and then to Chhukung to reach base camp of Island Peak. During trip you can enjoy the beautiful scenery of great mountains such as Everest, Lhotse, Nuptse, Amadablam and many other peaks all along the way and trekking through beautiful rhododendron and pine forest. This trip offers the opportunities to see the Khumbu mountain ranges, around Sagarmatha National Park, a world heritage site, the life style of the Sherpa people, Himalayan flora and fauna and also will get an opportunity to embark on an epic journey that our mountain legends Sir Edmund Hillary and Tenzing Norgay Sherpa set off on in 1953. Also, you’ll witness the highest altitude hotel in the world, The Everest Hotel, highest altitude airport in the world and highest place where still people live there. Experience climbing guide of Trekking Experts will guide you to the top of Island Peak even if you don’t have any climbing experience before.

Opportunity to embark on an epic journey that our mountain legends Sir Edmund Hillary and Tenzing Norgay Sherpa set off on in 1953.

Explore the culture and lifestyles of the local Sherpa people

Early morning you’ll transfer to airport and you’ll make an early start to take a spectacular, short mountain flight to Lukla, the start points for our trek. During the flight you’ll see scenic views of Langtang, Jugal ranges, RolwalingHimal, Gaurisankar and Menlumtse before getting your first glimpse of Everest. Upon arrival at Lukla airport you’ll meet trekking crew and you’ll spend a few minutes sorting out bags etc before setting off through this winding village to the trek start proper at the Khumbu ‘gateway’. It’s gently downhill on pitched stone trails through low rhododendron forest, small ‘garden’ farms and old and new hamlets to the banks of the foaming DudhKoshi River. There will be plenty of short stops to meet the locals, take photographs and just soak up the scenery and the clear mountain air as we meander along, the undulating trail glimpsing views of 6000m snow-capped peaks high above. Passing the enormous Mani stone at ThadoKoshi we meander up through the many Chortens and prayer wheels of Sano and along to our destination of Phakding in time for a late lunch.

After breakfast at lodge, you’ll start trekking through a beautiful pine forest that leads you along the DudhKoshi River and Hillary Suspension Bridge to reach to Monjo and starting point of Sagarmatha National Park. Here you’ll stop at check post of TIMS & National Park permit. The trail passes through the DudhKoshi, BhoteKoshi River, Jorsalle village, Large Dovan and cross one of the highest bridge over the DudhKosi River of Everest region and reach to Chautara from where we can see the first glimpse of the Mt. Everest. Further walking about one hour steep up we reach to Namche bazaar (maket). Namche Bazzar is known as ‘hearth of Khumbu’ which is one of the trading points for Sherpa people. It is also ideal market for visitors to purchase traditional crafts. Every Saturday there would be local street market, do not miss if you are there on Saturday.

After breakfast at lodge, you’ll descend down from Tengboche, winding through the rhododendron forest to Deboche and crossing a bridge over the raging ImjaKhol River. Hug the valley wall, and then traverse the plains to Dingboche, the start of the ImjaTse Valley. Dingboche is also the gateway to Chukung and farther beyond for the most challenging traverses towards Makalu area and Hinko Valley via Sherpani col 6100m and AmphuLaptsa pass 5780m. Then will check-in at lodge.

After breakfast at lodge, today you will trek slowly to Chhukung before heading to Island Peak Base Camp. You’ll trek towards east within the ImjaTse Valley, although the trek is gradual ascending, however you can feel the thin air as the altitude gains slowly coming towards Chhukung. At Chhukung, there are few teahouses overlooking superb view of the snowcapped peaks and glaciers. You’ll reach Chhkung at lunch time and then you’ll have free time to enjoy the views of mountains from Chhukung and prepare for Island Peak base camp. It is also important to rest at Chhuking for acclimatization.

Today you full free to explore around Chhukung and acclimatize the high altitude. You can go up to Chhukung Ri to stretch your body and adjust high altitude.

After breakfast at lodge, today you’ll trek to base camp of Island Peak (Imsa Tse). From Chhukung you’ll take left fork of the Imja Khola. You’ll reach Island Peak Base Camp near the south slope of the Island peak. At the base camp, your guides will give a detail about the climb. Your guide will demonstrate about how to use rope and climbing gears. You’ll use already fixed camps by local lodge operators.

Today very early morning you’ll head towards the summit of Island Peak to make summit. As your climbing guide briefed yesterday evening, you’ll start climbing very early morning so you can reach summit before noon as the afternoon winds can be a problem. Your climbing guide will lead the way you need to follow him while you’re ascending up to the rocky ridge before coming to the base of the glacier. Then you’ll continue up the glacier to South Ridge and follow this ridge to the summit by using ropes. Once you’re at the summit you can see outstanding views of Lhotse, Makalu,Baruntseand many other peaks in 260-degree view. After taking some photographs and enjoying a glimpse of panoramic views, you’ll return to the base camp. And after wrapping up from base camp you’ll descend to Chhukung. Due to bad weather, if you couldn’t go up for summit, then you’ll stay at base camp tonight and will try for summit tomorrow early morning.

Today is contingency day in case if there is bad weather. If yesterday’s weather isn’t favorable to make summit of Island Peak, today you’ll try your final attempt to Island Peak. And then back to Chhukung. If you’d already made summit yesterday, then today you’ve fully rest day at Chhukung.

After breakfast at Tengboche, you’ll trek to Monjo today. It is the same way you already had trekked. The trail follows Funki Trenga, Namche and then to Monjo.

After breakfast at lodge, today you’ll do your final day trekking to Lukla. You’ll trek to Lukla following Jorsale, Phakding, Chheplung and finally to Lukla. Upon arrival at Lukla, you’ll check-in at lodge and you’ll have free time to explore around Lukla. In the eveing you can celebrate your successful trip with your trekking crew (guide and porters).

Today is your last day in Nepal and you can relax at hotel or do souvenir shopping for your loved ones. Also you can visit world heritages sites of Nepal. There are seven world heritage sites in Kathmandu which are very beautiful, interesting and meaningful. You shouldn’t miss to visit them. You may contact our tour officer if you need any support for visiting those sites and its costs.

Support for airport pick up, drop and farewell dinner Support for tented camp, food and porters’ services for Island Peak Base Camp 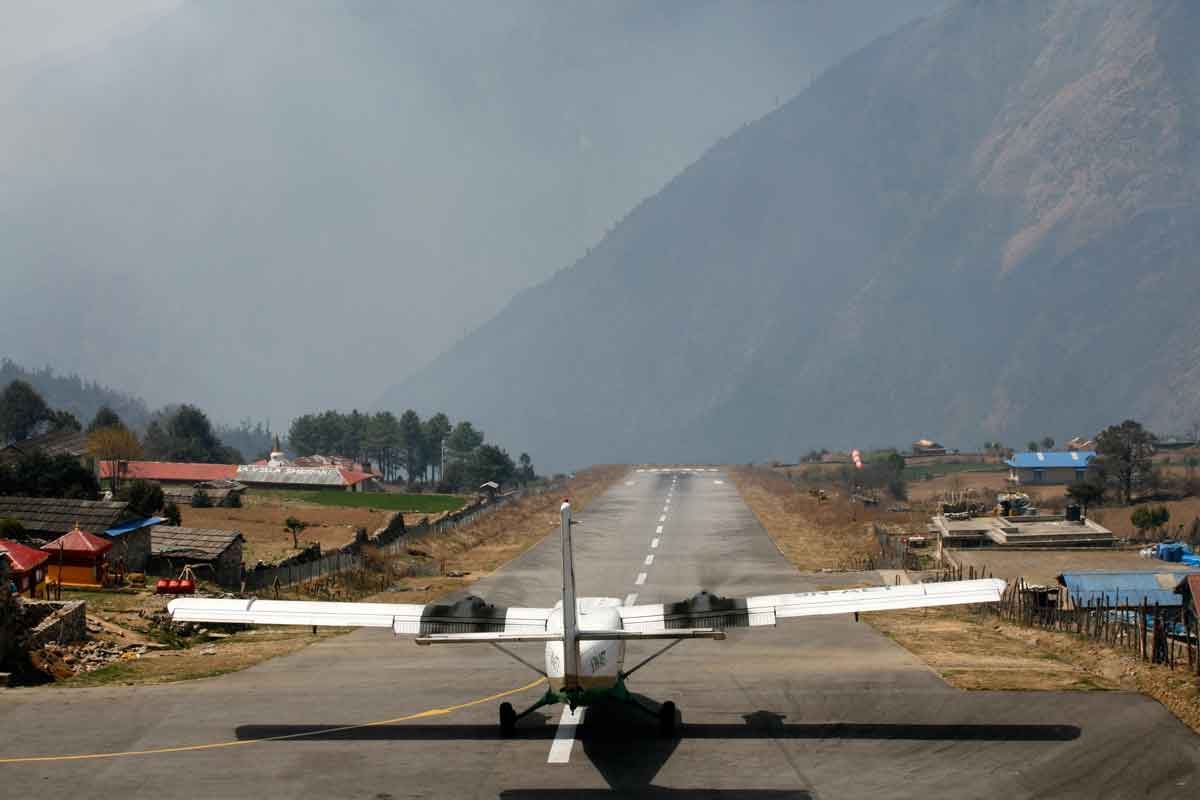 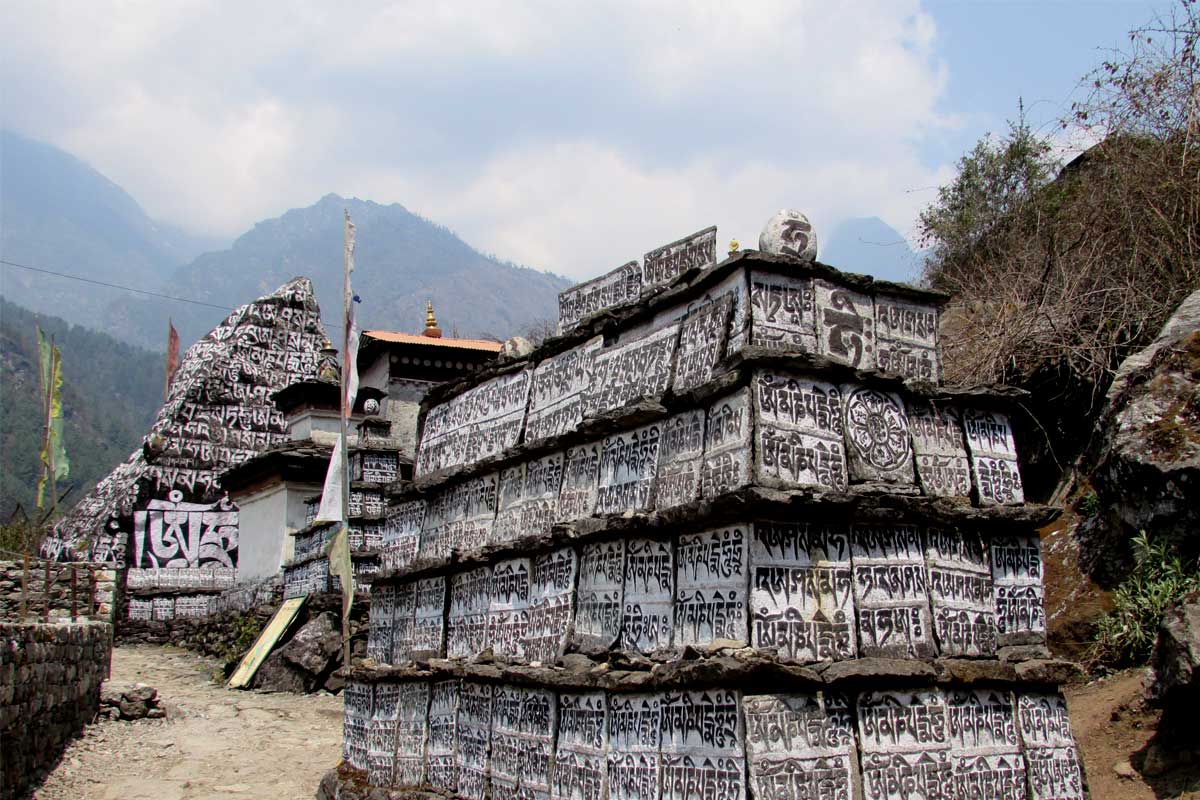 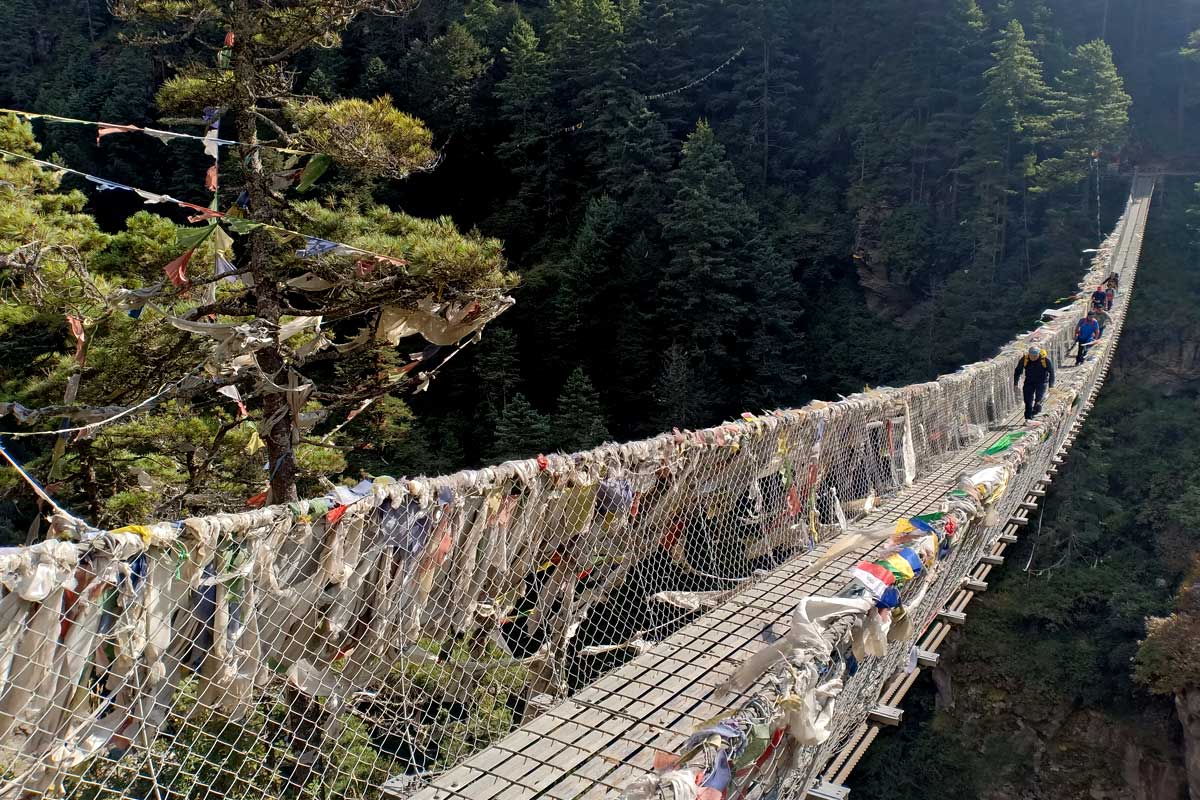 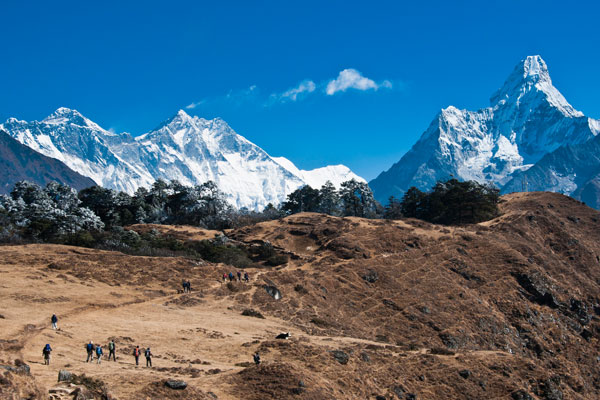 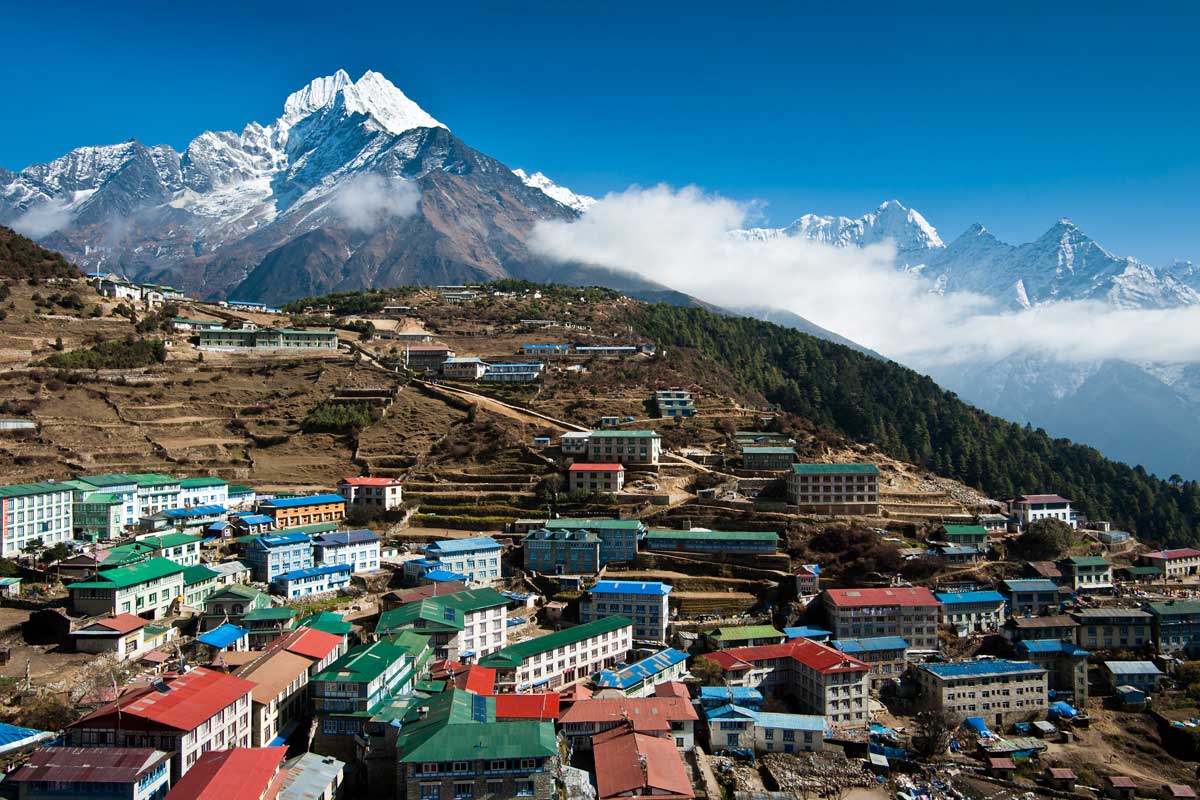 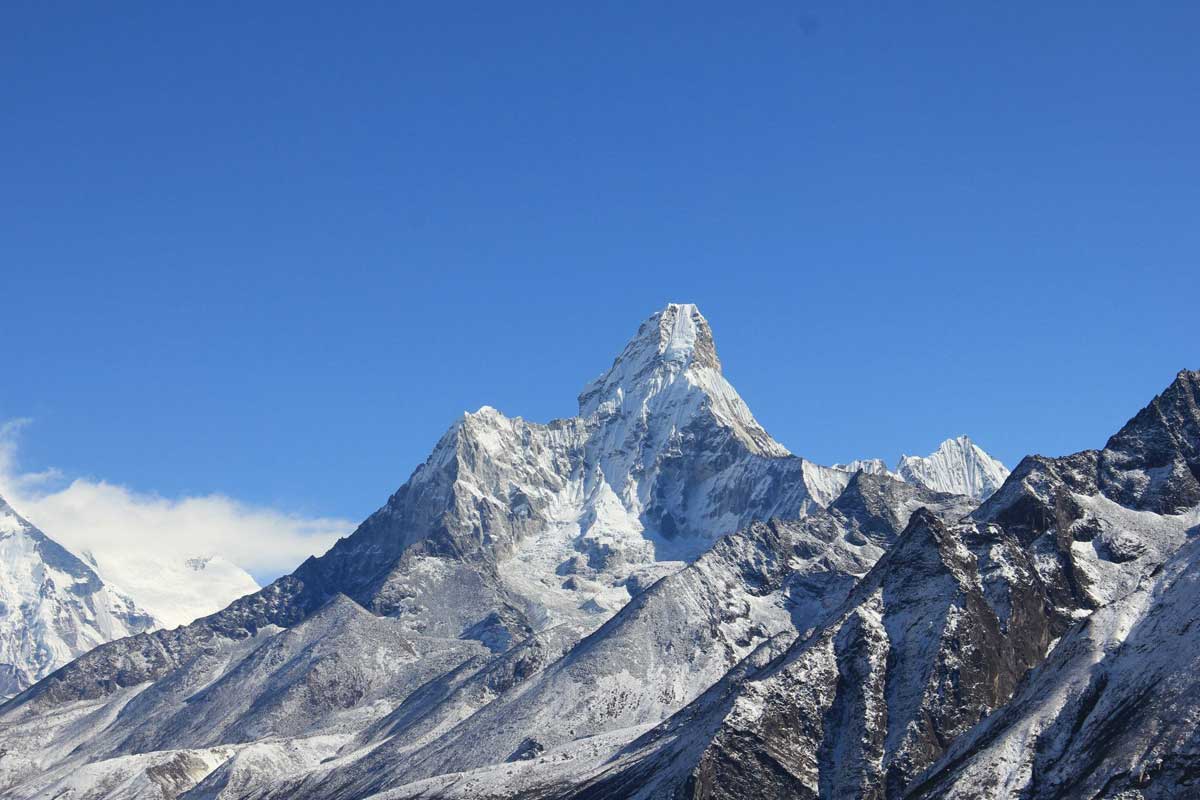 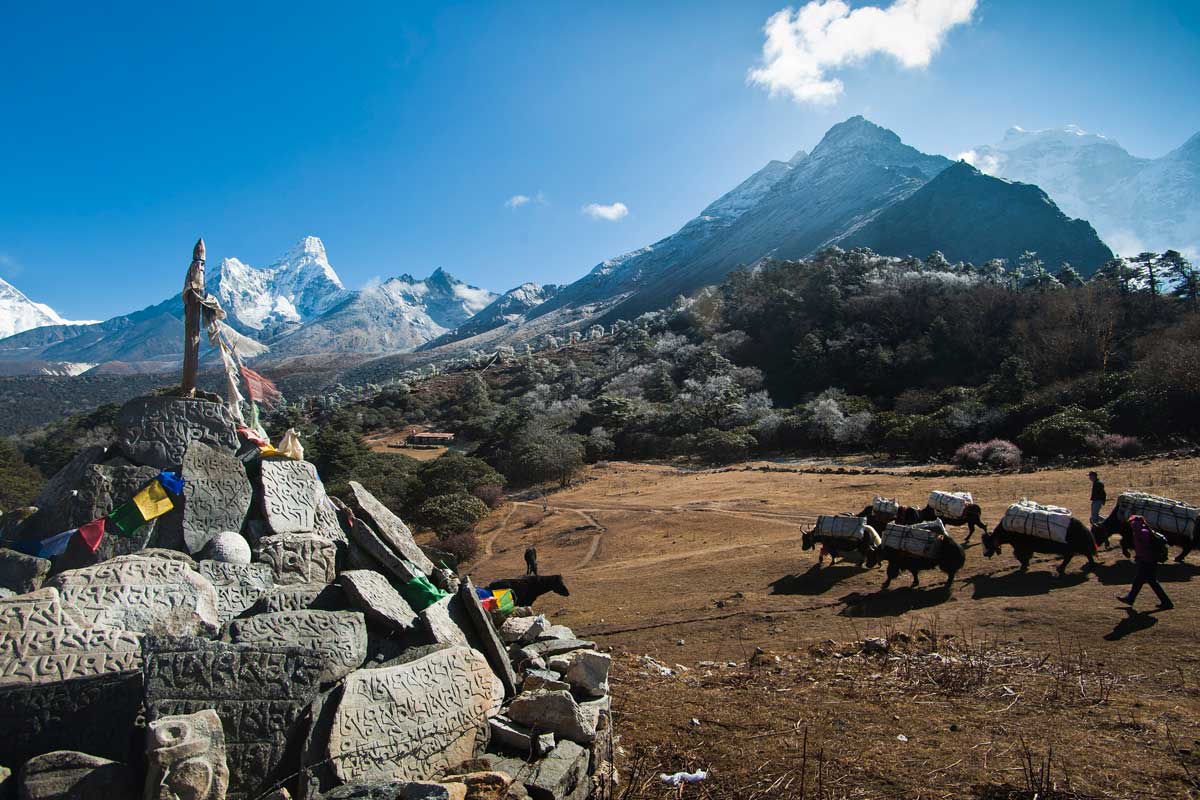 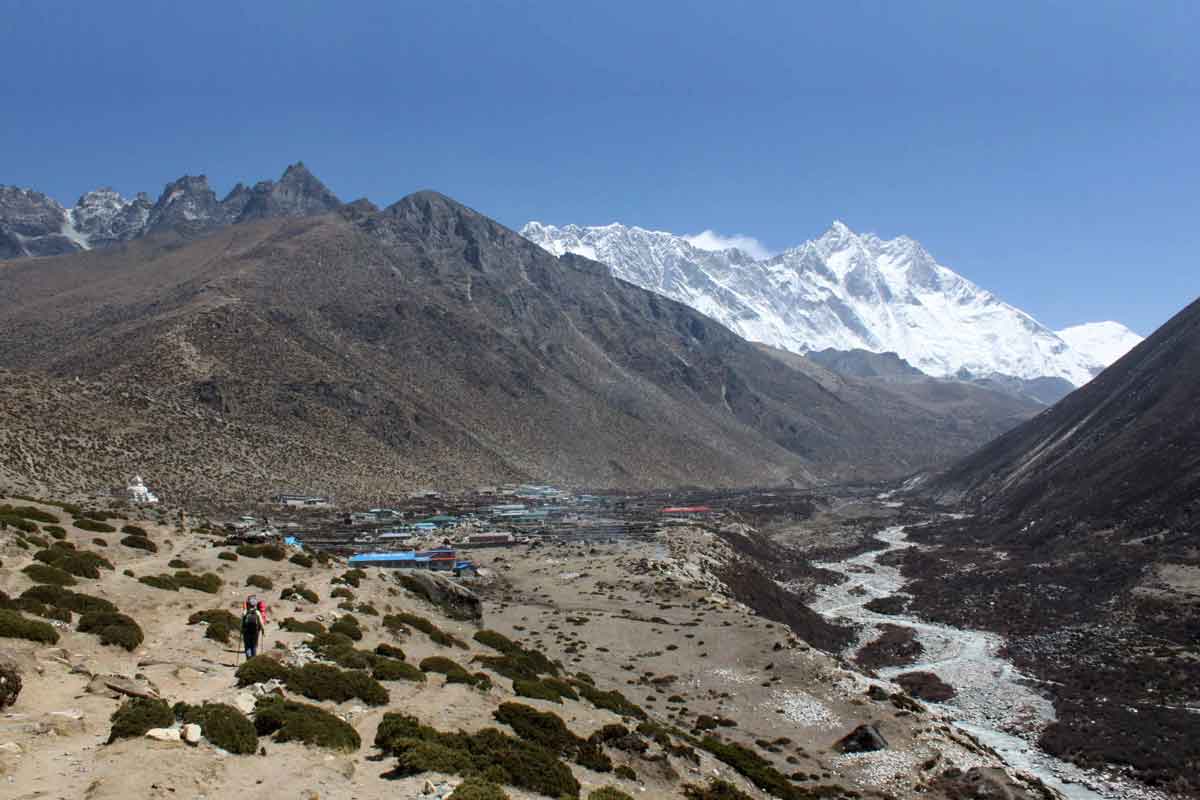 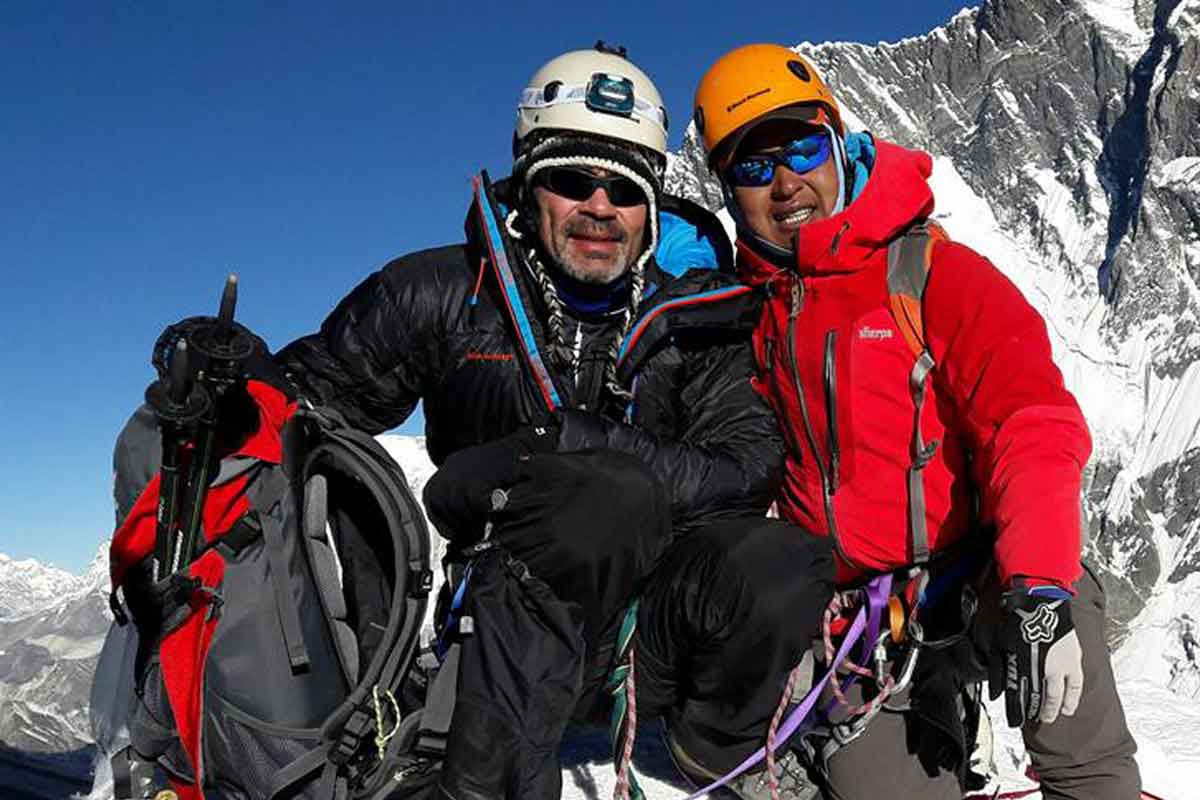 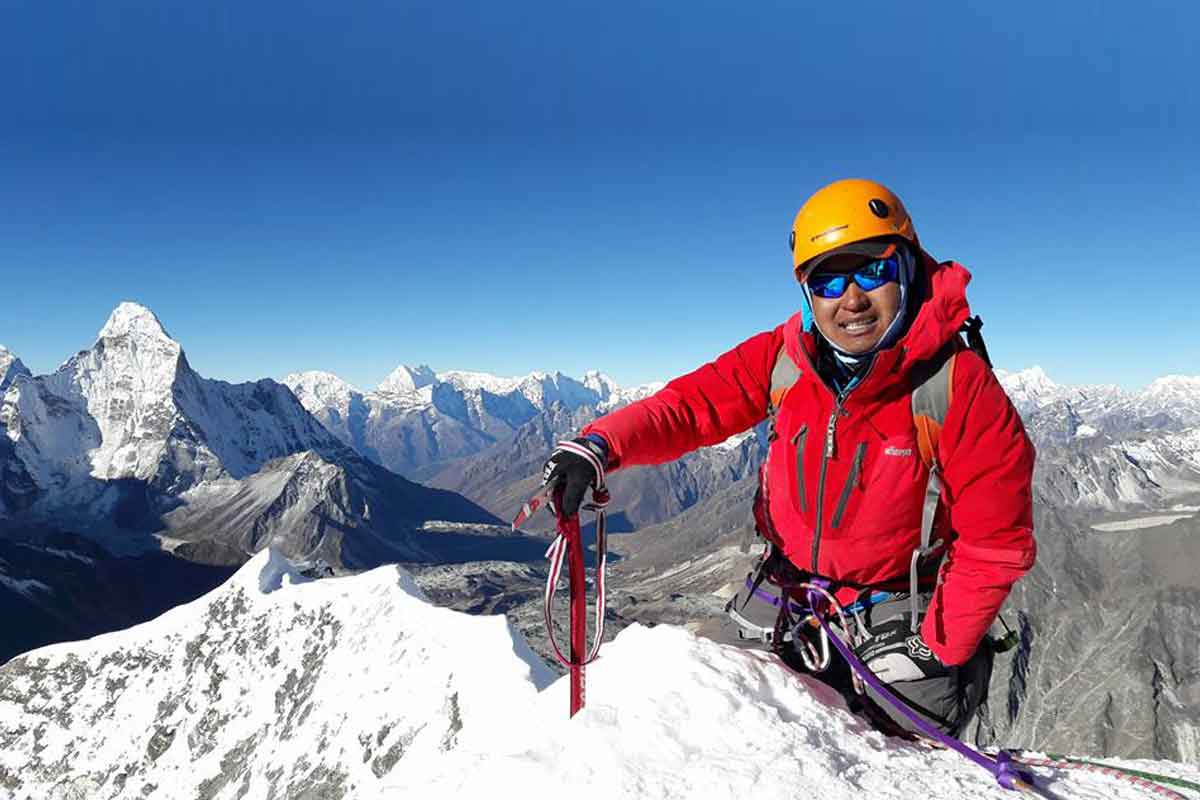 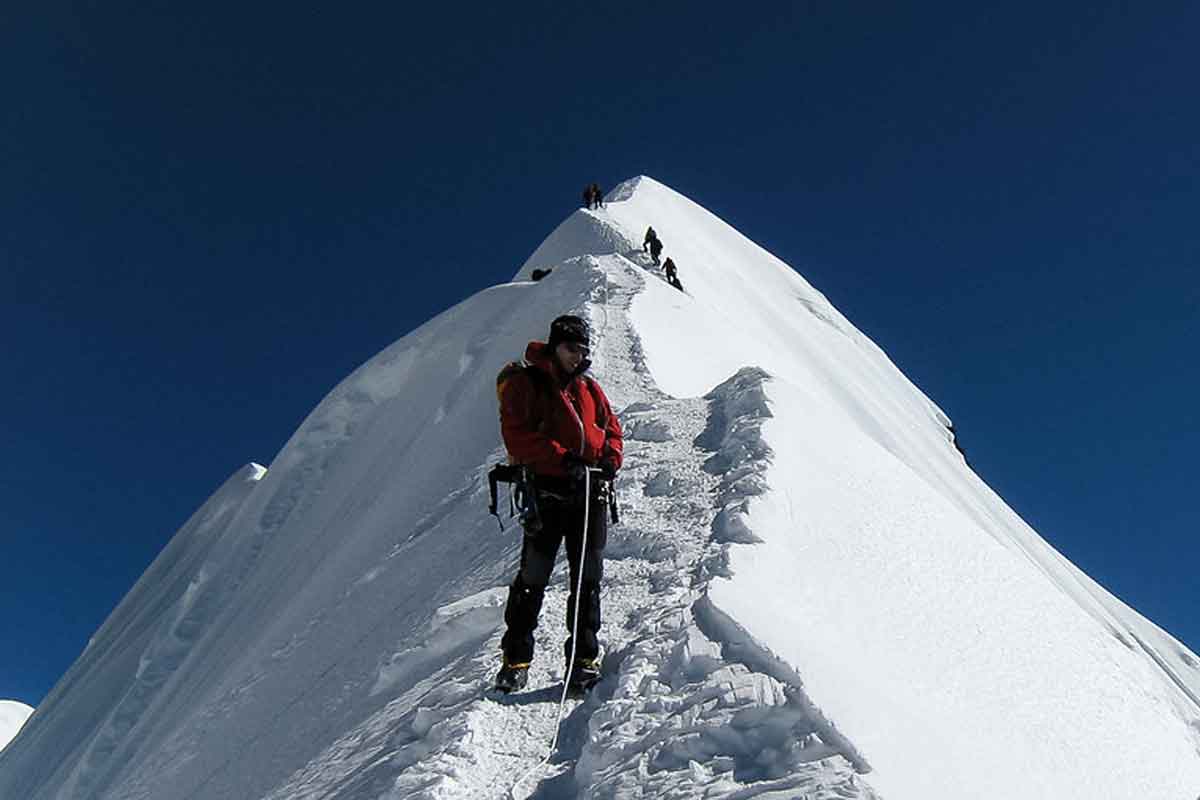 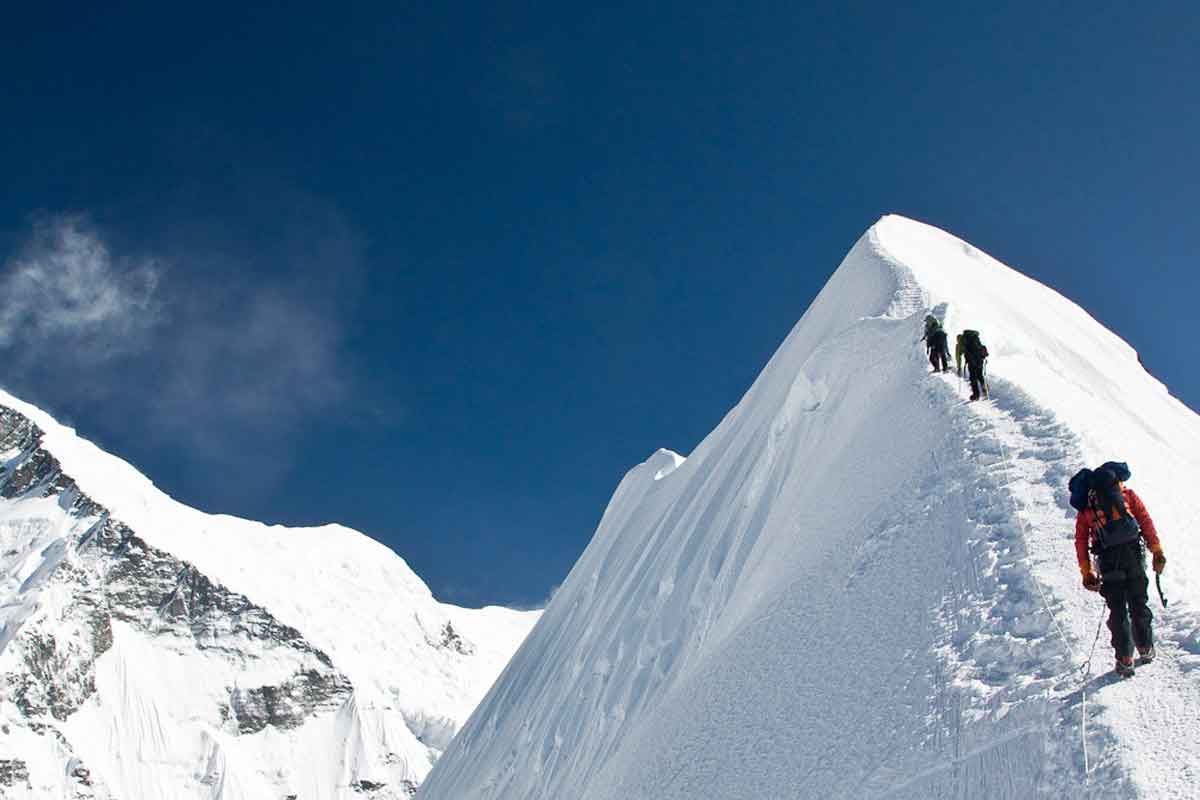 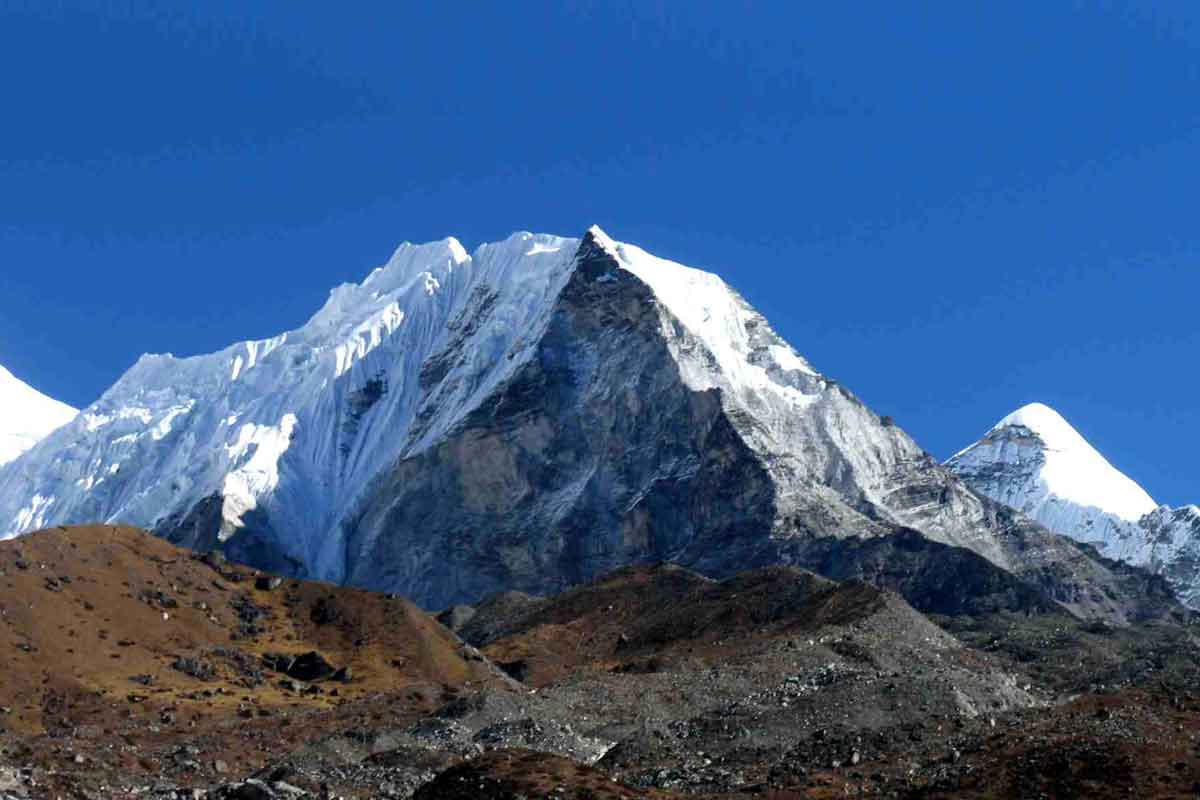 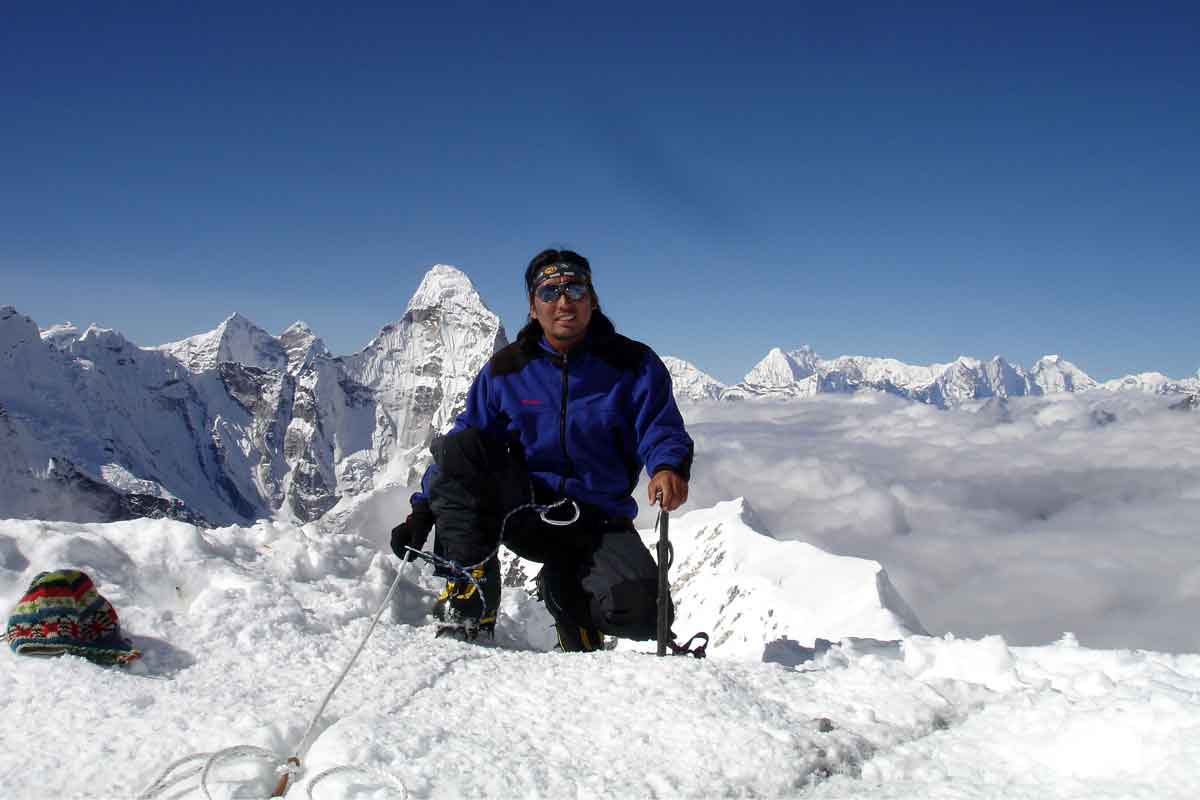 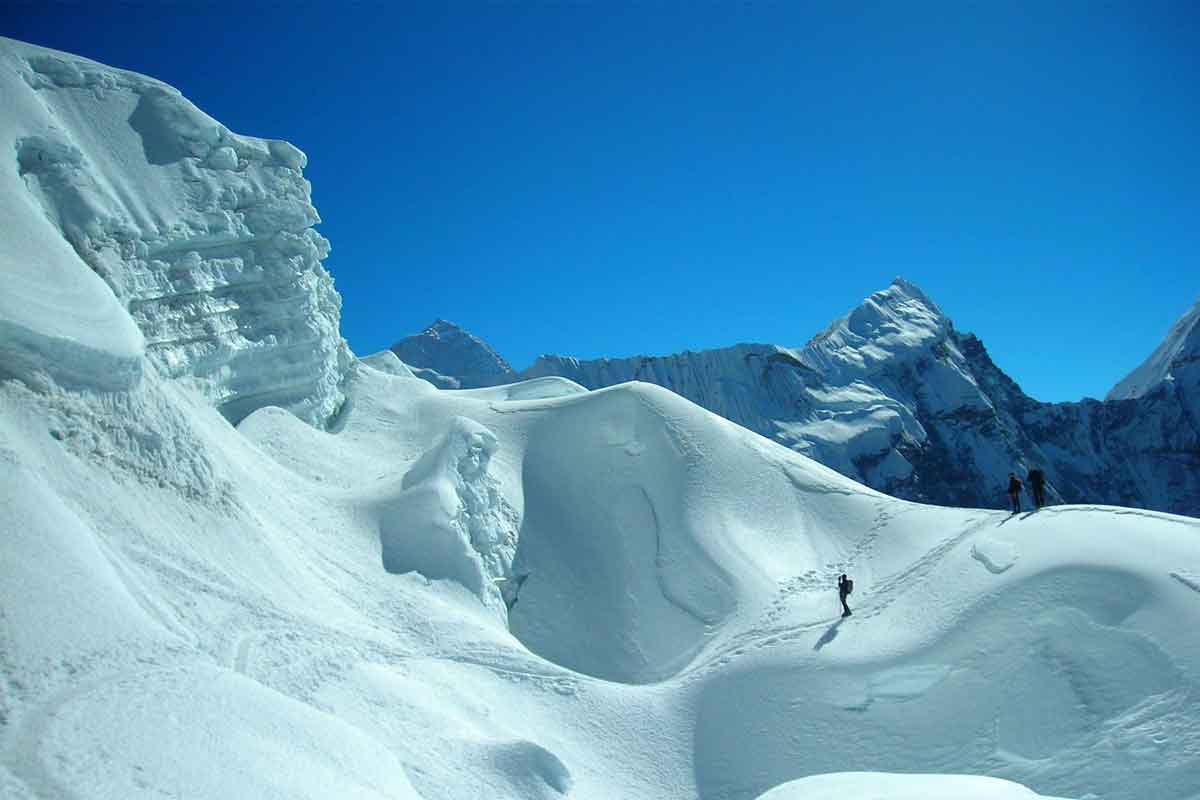 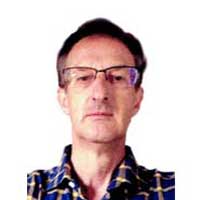 Good trek with many opportunities to the explore high altitude mountains and scenic views. Good guidance from Phu Dorje Sherpa who was very dedicated and gave a lot of attention to me. Food and lodge were nice. For this trek and intended acclimatization, I missed acclimatization days i.e. total duration was not enough. Overall very good this again in Nepal. 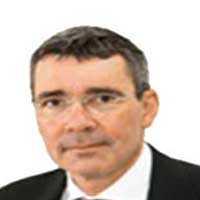 Guide Sonam did a perfect job! Then Kumar Rai our porter was perfect. All our things were in time without problem at the lodges. 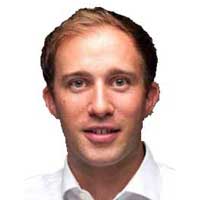 Trekking Experts was refereed to us by Nima Wangchu (Babu) and provided us our guide Phurba Sonam. Our experience trekking with Sonam (guide) clearly supressed our expectations! Sonam was very communicative and transparent with us throughout the trip, thanks to his well spoken English. He showed great proffesionalism, thanks to his outstanding practical and technical knowledge. We always felt cured of which made us confident and sage at all time. He is very accessible, smiling at all time and has great humour. I definatly would reccommend Sobam as guide. We would not have summit Mera Peak without him. Thank you Sonam! 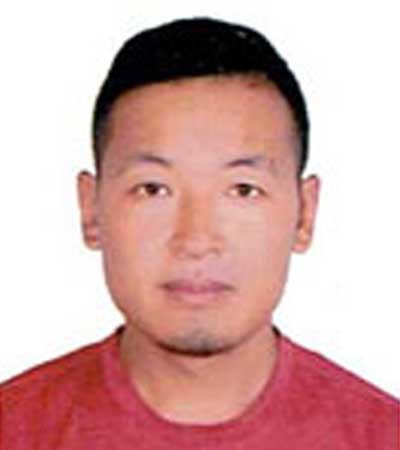